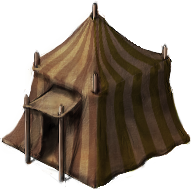 "This building turns civilians into soldiers"

The Barracks was a building that allowed the player to recruit Soldiers.
Barracks have been removed in Towns Alpha 0.42.

It required 4 stone to create, and could be placed on any 3x3 square of flat terrain other than water.

When placed, it enabled the option for Civilians to be converted into Soldiers (and vice-versa) by right-clicking on them and selecting "Convert to Soldier" (or "Convert to Civilian", to change them back).
Each barracks could support 5 soldiers. Once you had converted 5 civilians, you would have needed to build another barracks to train more.

Right-clicking the barracks and turning on "automatic mode" did nothing, but it had been confirmed[1] that it would do something in the near future. Turns out, he was wrong.